Share prices of Pinterest (PINS -0.05%) and Wix.com (WIX 1.33%) have both taken beatings in the first half of 2022. Each company was a high-flying early-pandemic winner as households and small businesses flocked to the internet during lockdowns and the start of the remote-work movement. However, as the global economy has gradually reopened, both companies have lost some steam. 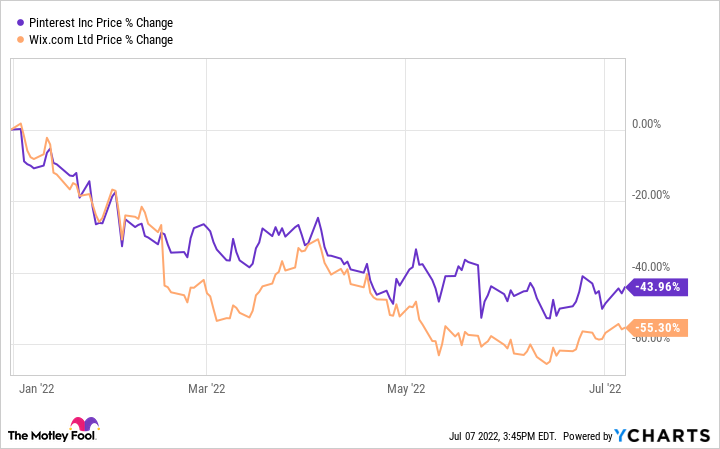 Pinterest and Wix have plans to find their new grooves, though. E-commerce remains a sticky sector, and it’s one that is expected to gradually grow for the foreseeable future. This bodes well for Pinterest and Wix. But one of these e-commerce stocks looks like the better buy right now.

Pinterest: Can a new CEO get the social site up to snuff as an e-commerce platform?

Visual search and social site Pinterest has amassed 433 million global monthly active users in the roughly 10 years since it was founded. It’s also growing its average revenue per user (ARPU) as it makes advertising tools easier to use for marketers and small businesses.

The issue is that as pandemic effects have eased, Pinterest has begun losing monthly users. ARPU growth has kept revenue headed up and to the right, but the company needs to increase the usefulness of its site to keep users engaged long term. More advanced shopping tools appear to be the direction the company will take.

Early in June, Pinterest acquired AI-powered fashion start-up THE YES to bolster its tools for e-commerce. Then at the end of the month co-founder and CEO Ben Silbermann stepped aside (and will become executive chairman) to make way for Bill Ready — former president of Commerce, Payments & Next Billion Users at Alphabet‘s Google. It will take time for Ready to settle in and any new strategy to start yielding results, but with hundreds of millions of monthly users, Pinterest has plenty of potential as a more robust e-commerce application.

After tanking 44% so far in 2022, Pinterest stock trades for 20 times trailing 12-month free cash flow. The company will likely cut into its profit margins as it pivots, but it has the firepower to adapt. Nearly $2.7 billion in cash and short-term investments and zero debt on the balance sheet will certainly help Pinterest’s evolution as well.

Wix: A long road to healthy profitability lies ahead

When it last disclosed its global user count last year, Wix had over 200 million small business and individual users. This website-building and website-management toolset has also grown into a top service for getting a business on the internet. The company has steadily expanded its offerings to encompass creative design, shopping and payments, and marketing.

But what was once a fast-and-steady growth engine also lost some serious steam this year. Wix’s revenue is now expanding in the low-teens-percentage range, and its focus has shifted toward getting the business profitable. The problem was that free cash flow was negative in Q1 2022. By 2025, Wix expects to be generating a robust 20% free cash flow profit margin, but that’s three years away.

So it’s been rough going for shareholders as Wix pivots from a growth company to one more focused on managing the bottom line. The good news is that those hundreds of millions of users create a lot of potential value as Wix steadily expands the tools available to them. For example, it has been integrating its services with Google and Google Cloud to make it easier for Wix customers to have a one-stop-shop for managing their business online.

Wix stock has fallen 55% this year, but given it’s not generating profit at the moment, it’s far more difficult to stick a meaningful price tag on it. If it takes a year or two for free cash flow to turn positive, it will get much easier to measure the value of this business. Wix has $1.2 billion in cash and short-term investments and $924 million in debt on its books.

The better buy now is…

Wix still has tons of potential if it can get fit financially, but Pinterest is already highly profitable and has tons of cash on its books. It will take some time for Pinterest to update its offerings to make it more useful as an e-commerce platform, but it certainly has the deep pockets to pull it off. And because it’s already profitable, shareholders have a baseline from which to value this stock — and by some metrics, it could be viewed as a value. That’s not the case at this juncture for Wix. Given this situation, I think Pinterest is the better buy right now.